by Flourish Digital Magazine May 8, 2021

A couple weeks ago, my friend Shelby and I reconnected with our mutual friend Jocelyn. She had three of her sorority sisters—Rade, Olivia, and Christell—over for a get-together, and we decided to crash. The night was so much fun, filled with laughter and smiles; we played drinking games, and complained about men. It was everything you want from a girls’ night! Jocelyn’s friends were so nice and hilarious, and Shelby and I were feeling like we had made some new friends, which is not as easy as it used to be before the pandemic, and therefore so much more rewarding now. However, when it came time for that part of the night where we took pictures together to commemorate what had been such a great evening, Jocelyn’s friends took the pictures. . .without using flash

The Next Best Trends | Sadiyah Adams

THE LIGHT | Our Energy, Our Excellence, Our...

The Light Shines Because It Shines

Mitigating Risk at Work and in Life |... 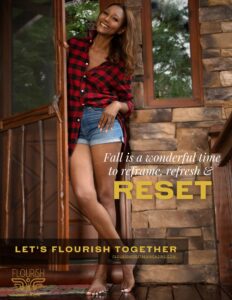 The Flourish Lifestyle is a digital and social experience. A life phenomena that offers a full-body-

Here are 4 Steps to Managing Risk in Your Portfolio by Daniel Evans of @evansandcompanyllcDaniel says, “Managing risk means minimizing the effects of a down market on your portfolio. How you allocate your investments in stocks and bonds plays a critical part. Once you know your risk tolerance, everything else about investing is more accessible. You will have greater clarity on the companies in which you invest in your portfolio. You will feel confident you are meeting your financial goals without taking on unnecessary risks from which you may not recover.” Read the article on page 28 in our current issue. ... See MoreSee Less

Each new article is more inspiring than the last. Meet Laurie Renfro @routineinterrupted Flourish Digital Magazine contributor, writer and spiritual seeker with a Master's degree in Spiritual Psychology “It hasn’t always been that way,” my oldest daughter began. “The first calendar was based on the lunar year, with the new year starting in March, when we enter the vernal equinox.”I love it when I learn new things from my children—when we switch places and they become the teacher. I should have known the daughter schooling me on the history of the calendar would become an astrology aficionado. Call it a stretch, but, when she was only four, she became obsessed with the Karl Lagerfeld perfume, Sun Moon Stars. It wasn’t the actual fragrance that captured her attention (although she begged to be spritzed on the regular). Instead, it was the rounded blue bottle with a sun, moon and stars relief covering its face. Read the whole story on page 8 and 9 in the current issue of FDM @ flourishdigitalmagazine.com or the link in our bio. ... See MoreSee Less